As soon as Prof. Edagawa from Tokyo University saw me during breakfast in a Slovenia hotel, he asked me if I have heard a sad news. After my reply that I have not heard anything like that, he informed me of an unbelievably sad truth – Prof. Tsai passed away the day before. This utterly unexpected news shocked me, I started trembling, and my hand holding breakfast plate started shaking. I sat on the nearest chair, remained quiet – did not want to talk to anybody. All the past memories started flashing back on my mind. I had exchanged some emails with him a few days before. I was hoping to meet him in the Slovenia conference. I was not able to accept this traumatizing loss. I wished that what I heard was not true, but I knew my wishes were powerless. To reduce my pain, I shared the news with a few people closer to me.

After completing my PhD from Germany, I started working with Prof. Tsai in 2001 as a Postdoctoral fellow. It was at a government research center called National Institute for Materials Science in Tsukuba, Japan. I continuously worked with him for the last eighteen years, literally until his last days. I was fortunate enough to publish more than 25 research papers with him. Just sev-en days prior to his departure, we submitted a research article for publication. The pain of losing him made me realise that he was more than just my collabo-rator. I had never felt this level of agony on death of anybody beyond my rela-tives.

In 1982, contrary to the existing scientific understanding that solid state mate-rials exist only in two phases, crystal and amorphous, an Israeli physicists Prof. Dan Shechtman experimentally proved that solids can form a third phase called quasicrystal. For this new finding, Prof. Shechtman won the Nobel Prize of Chemistry in 2011. Right after this discovery, Prof. Tsai was able to make a stable quasicrystal in his laboratory. This milestone in the emerging field of quasicrystal laid the foundation for the study of physical and chemical proper-ties of this new material. Different types of quasicrystals he fabricated are be-ing used by scientists in their research around the globe. He was like a syno-nym to quasicrystals. Many Experts of quasicrystal research are of the opinion that Prof. Tsai should have been jointly awarded the 2011 Nobel Prize of Chemistry. Although he was a towering figure of quasicrystal research, he was never hubristic. He was very simple and always approachable. Like a tree full of fruits bends low; a cloud carrying fresh water hangs low; he was down-to-earth, all the more humble with his prosperous knowledge of quasicrystals. Once he shared that he felt uncomfortable when he was decorated by the Em-peror of Japan. I have learned a lot from his simple and humble nature.

He was never bossy at work. Never used to pressure any of his students or postdocs or group members. Never set deadlines to finish work, never de-manded results. Never cared about when one is in and/or out from the labora-tory. We seldom find this kind of research environment in Japan. All and ever he gave was encouragement and promotion. He always persuaded me to par-ticipate in national and international scientific conferences and workshops, and to build network among experts. I later realised the importance of these activi-ties to become a successful researcher. The freedom he gave in research made us more responsible about our scientific work. I believe, this is why almost all of researchers who worked with him are successful.

Later, he left National Institute for Materials Science and joined Tohoku Uni-versity. He took a pay cut but chose to work at University. He gave importance to research over money. He believed that he would be able to do more re-search at a University. Later, I also moved from the national research institute to the University of Liverpool. At that time, I was recently promoted to a per-manent position of senior researcher. Dr. Shimoda, another collaborator, was not quite happy with my decision. One of the reasons to move to Liverpool was for the education of my children. I told Prof. Tsai about the disappoint-ment of Dr. Shimoda over my decision to move. He instantly replied – If I were you, I would decide the same way. He said, ‘we sometimes need to compro-mise in our professional carrier in favor of our families’ happiness’. Later he talked to Dr. Shimoda and helped to make a normal environment before I left. In every single meeting ever since, he used to ask about my family and share about his family. Over time, these personal chats deepen my closeness with him. He used to invite me for lunch or dinner whenever we got a chance to meet. Many times we had drinks together in one of my favorite places called ‘Ijagaya’.

In 2016, Prof. Tsai and I organised the 13th international conference on quasi-crystals in Nepal. More than a hundred experts from twenty two countries at-tended the conference, including the Nobel Laureate Prof. Shechtman. For the preparation of the conference, we went to Kathmandu together. We had the opportunity to meet the then Prime Minister of Nepal Mr. Puspa Kamal Dahal and invited him to inaugurate the conference. During the conference, he also met the President of Nepal Mrs. Bidhya Devi Bhandari. He used to take his re-sponsibility very seriously. He wanted to oversee all the details of the confer-ence preparation in person. Due to the devastating earthquakes of 2015, there was a growing safety concern to organise a conference in Nepal. But he argued that holding the conference would help Nepal in many fronts in such difficult situation. He also helped to convince other members of the advisory board of the conference. The conference meant a lot for Nepal and for me as well. Without his involvement and support, that conference would not have been held in Nepal.

For the conference in Nepal, he came with his wife. His secretary Mrs. Noriko Yubuta also came, her small daughter accompanied her. I met Noriko when I started working with Prof. Tsai in Tsukuba in 2001. She followed Prof. Tsai to Tohoku and helped him until the end of his life. Noriko is an example of how people used to be excited to work with and for Prof. Tsai. I have never heard anybody commenting anything negative about him.

One month after celebrating his 60th birthday in February 2019, he was diag-nosed to have suffered from the lung cancer. His cancer was already at the third stage. From then he mostly likely knew that he was going to expire soon-er. He did not want to share his health situation in detail to his colleagues, stu-dents and laboratory staff. Probably he did not want to be the cause of sad-ness and suffering to others. That was his nature. He used to always think of doing better to others and community rather than himself.

Until the very end of his time, he was very active in research. In the week of his departure, he met his students and colleagues in Tohoku on Wednesday, and gave a scientific talk at a University in Taipei on Thursday, according to one of his student I met in Slovenia. He had some meetings with companies related to research on Friday, but took his last breath on his wife’s arms on Saturday at a hotel in Taipei. Despite his wife’s request to take some rest and not to travel too much, he argued that – I still have a lot to do to my land of origin, Taiwan. In recent times, he was active to do some good work for Taiwan. He went to Japan for his university education after completing his high school in Taiwan. A few years back he told me that he could lawfully be the citizen of Japan but he wanted to stay as the citizen of Taiwan.

In some respect I am like him, working in foreign lands but still carrying the big love for my beautiful country in the center of my little heart. I feel that we are like grazing cowherd, no matter where we go in the daytime; we come back to our own home in the evening. I hope to go back to my motherland and serve the country. But I worry if it is going to be too late, the way it happened to Prof. Tsai. Due to technical difficulties, my wish to participate in funeral orga-nized in Taiwan and bid a farewell to my beloved professor did not become possible. Forgive me Prof. Tsai. You will always be in my thoughts and prayers. Good Bye Forever!!

(This article was originally published in a Nepal’s popular online portal in Nepali language. This is a translated version.
https://ratopati.com/story/89652/2019/6/4/prof-chai-no-more?fbclid=IwAR2nx-iNwpQFgRMCWBMnedFG7-lxeQdsyguK-XfCO13wnGND8wybnt3i-iw) 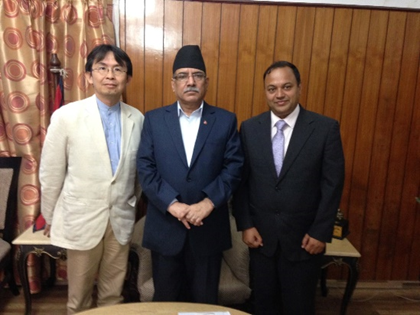